Here's how I started Pablo on solid foods around 4 1/2 months, giving him the same puree for about 4 days in a row, in case of any food allergies (listed in order of introduction below).

My strategy was to really give him a taste for vegetables first, so I delayed fruit purees to about 5 1/2 months, and tried vegetables that weren't too sweet first, to see his reaction. He really seemed to like the veggies, so I kept going.


*Some babies are sensitive to broccoli and other types of "cabbage", so I was careful about that. He seemed to digest it fine, so followed with various other types.

1. Quantities & proportions: A lot of leafy veggie purees require a bit of potato as a thickener. While 4-6 months is too early to offer potato on its own, I read it was fine to put a little bit with the vegetables to thicken. To make a batch (about 8-10 oz, which I would freeze in 1 oz jars), I would put about 1 1/2-2 cups of the cut up vegetable with 1 small potato (the golden or pink ones).

2. Steam vs. boil + cooking times: Steaming being the ideal to preserve all the nutrients, I steamed most of the vegetables, except for a few on the bitter side, where boiling them attenuates the bitter flavor, such as asparagus and brussels sprouts. Except for zucchini, which steams in about 8-10 minutes, most other vegetables take about 15 mn.

3. Frozen vs. fresh: I found a wealth of information on http://wholesomebabyfood.momtastic.com on this. The bottom line is that there are more nutrients in a frozen vegetable that was probably flash-frozen shortly after being harvested, than in a fresh vegetable that had to travel and sit on shelves for days before making it to your kitchen. So I buy frozen when I can't find organic locally grown vegetables.

4. Carrots & spinach: Because of the naturally occuring nitrate levels in these veggies, I waited til about 5-6 months to be on the safe side. One thing though is to avoid using the cooking juices to mix with those veggies, and just use water instead. A great summary of that topic at http://wholesomebabyfood.momtastic.com/nitratearticle.htm

5. Texture: to make the purees smooth, you can always add some water to mix, or some of the cooking juices (but not with carrots and spinach, see above. I avoid it also with vegetables on the bitter side, like endives or asparagus). You can also add some formula or breastmilk into the puree before serving to make it smoother.

6. Mixes: I made a point to give him first each vegetable "pure" (or just with potato), and not to mix them too much the first couple of months, so he would get familiarized with all the individual flavors. I waited til about 7 months to start doing simple mixes (see my section on 6-8 months purees).

7. Baby food processor: I use the Babycook by Beaba because it was given to me as a gift. It is a very convenient device, steams and mixes. However, the same thing can be achieved with a steamer and food processor. The mixing in the Babycook isn't as powerful as it could be, but it works.

Anatomy of the French four-course meal

I’m sure you’ve heard the expression, “It’s about the journey, not the destination”. I was recently asked to give a sort of “practica... 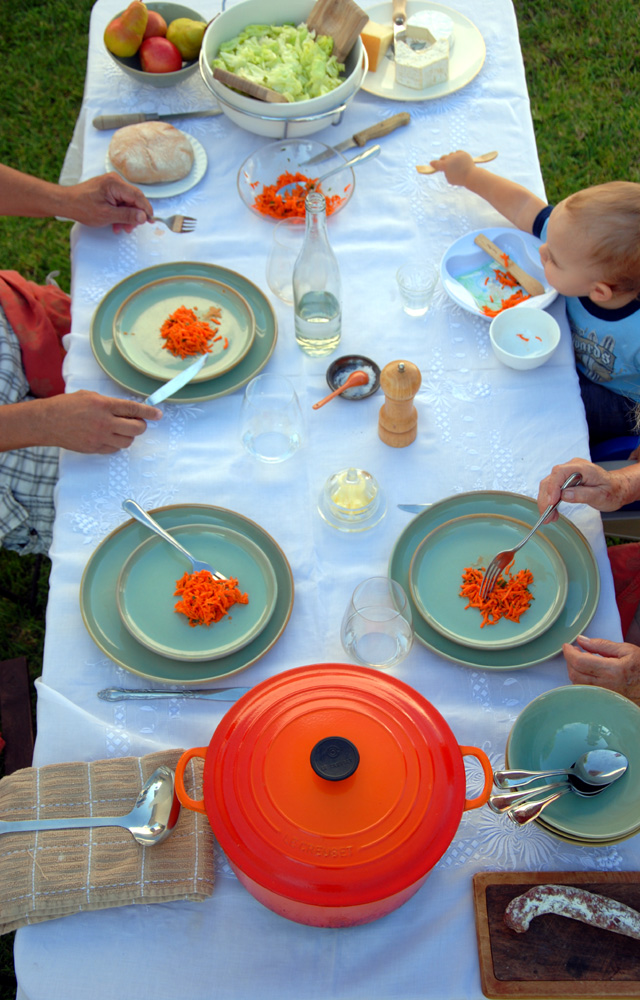 I always love to hear from you, via comments or email at frenchfoodiebaby@gmail.com

Books and other products mentioned in the blog are often linked to an Amazon Associates account whereby I earn small commissions on products purchased.